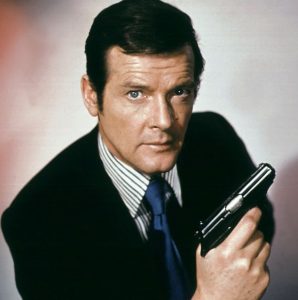 The man with the Golden Gun (Photo: Sportsphoto Ltd./Allstar)
By SHOWBIZ CORRESPONDENT
and AGENCIES
newsdesk@reporter.co.ke
Former “James Bond” actor Sir Roger Moore popularly known as 007 has died in Switzerland after a short battle with cancer, his family said Tuesday in a statement posted on Twitter.
Moore was 89.
“It is with a heavy heart that we must announce our loving father, Sir Roger Moore, has passed away today in Switzerland after a short but brave battle with cancer,” his family’s statement read. “The love with which he was surrounded in his final days was so great it cannot be quantified in words alone.”
After replacing Sean Connery in the “James Bond” films, Moore played the infamous British spy from 1973 until 1985. He made his 007 debut in the film “Live and Let Die,” and last appeared as the suave secret agent in “A View to a Kill.”
The London-born star is best known for playing famous secret agent 007.
He starred in seven Bond movies between 1973 and 1985.
Before his glittering movie career, Sir Roger served in the Royal Army Service Corps as a second lieutenant, after being conscripted for national service shortly after the end of the Second World War.
Sir Roger Moore was the son of a poor London policeman from the back streets of Lambeth who grew up to become James Bond and The Saint – as one of the most successful actors of his generation.
And in later life, shocked by the poverty he saw in India, Moore became a goodwill ambassador for Unicef, the United Nations’ children’s fund.
More than a billion people saw him play Bond, making him one of the best-known British actors in the world.
He brought a casual air of dashing elegance, sophistication and a surprising iron streak of ruthlessness to his two most famous roles.
At 6ft 2in with pale blue eyes and fair hair, his debonair good looks were ideal for heroic roles.
But part of his success was due to the sardonic approach he adopted, as if winking at the audience to share a mutual joke saying: “I’m having fun, are you?” 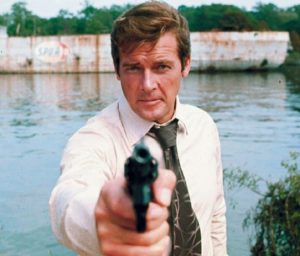 He starred in seven Bond films (Photo: Press Association)
His acting style was sometimes criticised for its lack of depth, yet he achieved huge success while happily acknowledging his limitations.
He once admitted he could not act “in the Olivier sense” but described himself as a good technician.
“When I was doing The Saint on television I had two expressions; as Bond I’ve managed to work up to four,” he joked.
His luxurious off-screen lifestyle was a long way from his roots in south London where he was born at Aldebert Terrace, Lambeth, in 1927, the only son of a policeman.
He went to primary school in Stockwell and, to everyone’s surprise including that of his headmaster, he won a scholarship to Battersea Grammar School.
But at the outbreak of war in 1939 he was evacuated to Worthing in Sussex.
At the time, there was little sign of the debonair charm which was to mark his career. He was quiet, somewhat strait-laced and rather plump with a strong south London accent.
Art was his best and favourite subject and he decided to leave school at the age of 16 to take up a job as an assistant in a London studio specialising in cartoons.
There was little work for the young actor and he began a part-time modelling career to supplement his income with Audrey Hepburn in an advertisement for Valderma “to get rid of the blemishes off your back”.
In 1952 he met the singer Dorothy Squires at the peak of her career, whom he married a year later in the United States after divorcing Doorn.
He had decided to try his luck in America. And, ironically, it was there that he finally lost his cockney accent after Metro-Goldwyn-Mayer Studios sent him to a dialogue director.
He made a number of fairly unimpressive films, including The Last Time I Saw Paris, with Elizabeth Taylor. And it was television which made his reputation with a series of roles as dashing heroes.
It began with Columbia’s Ivanhoe series which was made in Britain. It was followed by The Alaskans and then Maverick.
In a brief return to films, he agreed to co-star with Italian actress Luisa Mattioli in The Rape of the Sabine Women in Rome in 1961. 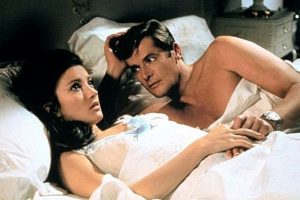 Jane Seymour played his main love interest in Live and Let Die (Photo: Publicity Picture)
He fell in love at first sight with the stunning Luisa and they set up home together. His marriage to Dorothy Squires was finally dissolved in 1969 after she at last agreed to divorce after years of acrimony.
In 1962 Moore returned to television after he was picked by ATV boss Lew Grade for the part of Leslie Charteris’s hero Simon Templar, The Saint.
It was the role he played for seven years and, with it, came fame and worldwide recognition.
The man whom one critic said would “never make an actor” was seen eventually in more than 80 countries.
Some believed he would find it impossible to escape the image of The Saint but he returned to television in 1972 in the highly successful series The
Persuaders in partnership with Tony Curtis.
But by then he was already earmarked as the next James Bond when Sean Connery decided Diamonds are Forever was to be his curtain-call in the role of 007.
Connery was so much the embodiment of Bond that many sceptics feared Moore would lack the rod of iron behind the suave exterior.
But with the release of Live and Let Die in 1973 he triumphed with a performance which skilfully blended strength with humour. 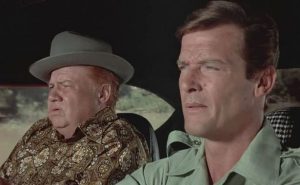 Sir Roger in The Man with the Golden Gun (Photo: EON Productions)
Six more Bond films followed over the ensuing 12 years – The Man with the Golden Gun, The Spy who Loved Me, Moonraker, For Your Eyes Only, Octopussy and A View to a Kill.
At the end of A View to a Kill in 1985 he decided to hand back his licence to kill. “I realised that jumping around with bullets and bombs in my middle-fifties was really daft,” he said.
He spent twelve years in the role (from his debut in 1973, to his retirement from the role in 1985), and made seven official films. He was also the oldest actor to play Bond: he was 45 when he debuted, and 58 when he announced his retirement on December 3, 1985.
Moore himself was quoted in the contemporary press as saying that he felt embarrassed to be seen making love scenes with beautiful actresses who were young enough to be his daughters.
His James Bond was light-hearted, more so than any other official actor to portray the character. He often portrayed 007 as somewhat of a playboy, with tongue firmly in cheek, but also as a very capable and seasoned detective.
He made a number of other films but discovered the cinema-going public could not always accept a change of image. In some cases, heroes were meant to remain heroes, he once said.
It was in 1983 that his life changed when filming his sixth film as James Bond in India. Shocked at the poverty in India, he became interested in the Third World humanitarian effort.
His friend Audrey Hepburn had impressed him with her work for Unicef, and consequently he became a Unicef Goodwill Ambassador in 1991. He was the voice of “Santa” in the Unicef cartoon The Fly Who Loved Me.
During his 1980s, Moore appeared only occasionally in film or television, notably as Lord Edgar Dobbs in The Quest (1996) and an episode of the American TV series Alias in 2002.
In 1989 he was invited by Andrew Lloyd Webber to star in his new musical, Aspects of Love. Despite grave doubts, Moore agreed to accept the part after much persuasion by Lloyd Webber.
But six weeks before the musical was due to open in London’s West End, Moore withdrew because he felt his singing was not up to the role. 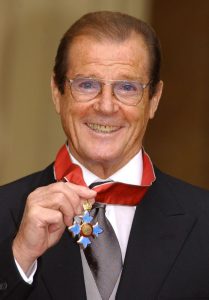 Sir Roger Moore with his knighthood at Buckingham Palace in 2003 (Photo: Press Association)
It was a courageous act and done, as usual, with the full support of his close family.
Despite having made millions through his film and television career, friends stressed he was one of the most modest and charming actors in the business and all that really mattered were his wife and family.
In 1999, Moore was created a Commander of the Order of the British Empire (CBE), and a Knight Commander of the Order of the British Empire (KBE) on June 14, 2003.
The citation on the knighthood was for Moore’s charity work, which has dominated his public life for more than a decade. Moore said that the citation “meant far more to me than if I had got it for acting… I was proud because I received it on behalf of Unicef as a whole and for all it has achieved over the years”.
Sir Roger was the longest-serving actor to play the womanising MI6 agent, having portrayed 007 in seven films.
Last year during a question-and-answer session at London’s Southbank Centre, he admitted that, despite winning the coveted role of the martini-swirling spy, one part he wished he had landed was Lawrence of Arabia.
He said: “I remember Bob Baker and I going to see Lawrence of Arabia and coming out both being very depressed and saying ‘We might as well give up the business’, because they had made the best movie that had ever been made.”

Report: How to cut the cost of wind energy in half