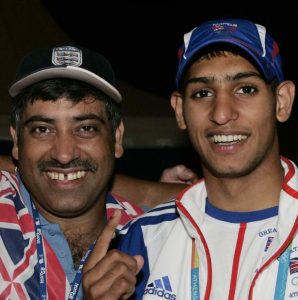 Amir Khan and dad Shah are all smiles at the 2004 Olympic Games. Photo: Daily Mirror
Amir Khan is keeping boxing and family separate for the sake of his career and his marriage.
Khan has dropped his dad as part of his overhaul of his management team following the savage rift which has threatened to tear his family apart.
Shah has been with Khan throughout his amateur and professional career, famously wearing a Union Jack waistcoat at the 2004 Athens Olympics, and was his manager.
But he criticised Khan’s wife Faryal in the bitter and very public row between her and his family, and the former world champion felt he needed to take a step back.
“My dad is not going to be negotiating fights,” said the Bolton boxer.
“I love my family to bits, but my business is boxing and I’ll have a different team to do that.
“My dad, my mum, I respect them. I want a family relationship with them rather than a business relationship. They’ll be at my next fight, hopefully. I will invite them.
“When you mix the two it can get a bit difficult. That’s why I want to keep them separate.”
Khan’s uncle Tahir Khan and pal Saj Mohamed, who was best man at his wedding, have also gone, and the star admits the feuding has hurt him deeply. 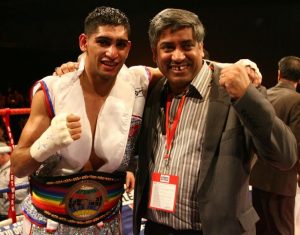 The pair seven years ago, after a successful Commonwealth lightweight title fight. Photo: PA.
The former unified light-welterweight champ, now back training with Virgil Hunter in San Francisco following surgery on his right hand, says boxing kept him sane.
“Yeah, everything is stabilised back home,” said Khan, who was in Las Vegas at the weekend for Carl Frampton’s defeat to Leo Santa Cruz.
“Being out gave me time to sort out stuff which was going on, especially at home, and be a man, and do things my way.
“It’s harder in the UK, but here everything is more chilled. Boxing gets me away from everything, so I’m glad I’ve got it. If I didn’t have boxing, I’d go mad with all the stuff that’s gone on.”
Khan wants a comeback fight in the UK in May before a tilt at the WBC welterweight title or IBF champ domestic rival Kell Brook at the end of the year.
He insists he isn’t finished, despite being sparked out by Saul ‘Canelo’ Alvarez in his most recent fight last May.
“I never thought about retiring and I don’t want to go out on a loss like that,” said the Bolton fighter, who last held a world title in July 2012.
“Because I won a world title at a young age, people think I’m finished, that I’m past it now. I’m only 30 and many fighters only win their first world title at 30. I’m much smarter and more mature now. I’m at my peak and I believe I can win a world title this year.”
SOURCE: MIRROR