Gambia President Yaya Jammeh with President Barrack Obama. Photo courtesy.
BY KURIAN MUSA
Jubilations rocked Gambia’s capital Freetown after reports emerged that President Yahyah Jammeh had lost to his main rival Adama Barrow.
By the time of going online President Jammeh had not called President-elect Barrow to concede defeat.
A journalist from the Reuters news agency said she has been speaking to opposition candidate Barrow and he was waiting for a call from the president conceding defeat.
Jubilant pro-Barrow supporters poured into the streets across the country to celebrate the defeat of Jammeh.
Internet that had been disconnected had been restored. Exiled Gambian journalist Kemo Cham also celebrated the defeat of Jammeh.
“We did it, guys. A new dawn. No more fears. We are a free people. I want to shed tears but I can’t. But I know I am crying in my heart. I am free now to visit my country and see my mum and dad and siblings, after about eight years in exile. Allah is great!” said Kemo Cham who has been in exile in Sierra Leone for the last eight years
Kemo , a Daily Nation correspondent in Sierra Leone poured out his heart in an election that has ended Yahya Jammeh’s 22 years dictatorship.
Yahya has declared himself a lifetime president that could see him rule ‘a billion years,’ in what has appears that he may not concede defeat.
In a Ugandan style of benchmarking on how not to do an election_ the Gambia Authorities made the internet blackout and International calls block.
There has been a serious campaign on social media to vote out the incumbent president and it is the main reason he shut down the internet and stopped international calls into and out of the country on the eve of polling.
Kemo Cham, a Gambian Citizen, is a correspondent for the Daily Nation in Freetown, the largest Capital city and economic and political centre of Sierra Leone.
The Journalist on exile spoke to me on phone and by e-mail saying the main contentious issue in the election are: Freedom and liberty Simple as that.

The Opposition leader by December 2, 2016 was tipped to win by the way of provisional percentages of the poll result. “I left Gambia some 8 years ago. Talking to friends and family, and by the results we are seeing so far, there is demand for change from what we are seeing they have voted,” Said Kemo. The opposition leader is leading so far and, “there is high hopes we will win,” said Kemo.
A huge military presence
Sidi Sanneh, A former Gambian civil servant with sectoral experiences in Economic Planning, Agriculture, Education, Finance and Trade, said there are expectations of a huge margin of victory for Adama Barrow of the opposition Coalition in Brikama. And the military command has decided to deploy armed military personnel in and around the town. A huge military presence can also be seen in the IEC office complex.
The Former Executive Director at the African Development Bank and Former Foreign Minister and Ambassador to Senegal pointed out that: “Barrow’s margin of victory is expected to be huge given the fact that he filled three ballot boxes in a town that has a combined vote total of over 60,000 registered voters of Brikama North and Brikama South Constituencies. It is believed that there will be some trouble if Adama Barrow is declared the winner.
Sidi Sanneh , a UNDP Resource Mobilization Adviser maintained that they will continue to stay on Yaya Jammeh’s case for as long as it takes. “My promise to my children and grandchildren, “he said.
Asked whether the ruling government would hand over power, Kemo Cham said, “He will, somehow. By hook or by crook. You remember I told you when we were in Uganda I was in exile in Sierra Leone. 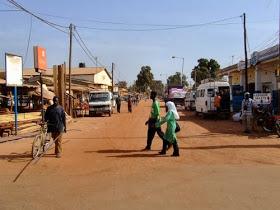 A deserted Brikama town in Gambia while the counting of votes was going on. Photo courtesy.

Kemo has been on exile as a journalist and not a politician. “I just want change. He has been in office for last 20 years. He came to power in a coup in 1994.
The dictatorial tendencies of staying longer has not been justified and does not make sense to the country’s economy.
Life goes on in Gambia amid fear and despondency. One thing is clear is that the president has used divide and rule tactics, a combination of religious and tribal bigotry, plus extra judicial killing, arrests, disappearances, to keep himself in office all these years.
“Gambian politics has never been about policy, no manifestoes. When I said we have a dictatorship that’s all about it. In a dictatorship there is no opposition strongholds, because no one wins, only the dictator,” noted Kemo
Free press?
Kemo Cham narrated how he took off, and his case is a classic example of a chained press in the Northern Africa State.
He said: “There are dozens of my colleagues in neighbouring Senegal, US, UK, and elsewhere in the world. Local media has been under censorship for time immemorial.”
Elections are being covered by foreign press that is the BBC and Reuters.
There are possibilities of violence in the election. Chances of a smooth power transfer are not feasible, by the way the delay of announcing the poll result has played out.
Given the history of violence, Gambians interviewed on phone said they won’t be surprised. They do not expect him to go down easily, even if that is what they want.
Already delays in announcing the results points to a possible plot to rig the polls. And the absolute communication blackout between the outside world and Gambia is an indicator of human rights violations.
But, people are bypassing the communication system. Some go near the border with Senegal to be able to make calls using Senegalese telephone cards and other various ways.
No deaths
Sources reveal that there is security all over the place in Gambia _ a police state. “In a police state you don’t demonstrate unless you want to die, “said Kemo.
However, Few months before these polls several of the top Officials of the largest opposition party, including presidential candidates, where jailed for marching to demand the body if their colleague murdered by security agents for earlier demonstration
Questions begging for answers are if the polls were credible and what caused the delay to announce the winner.
TheGuardian reported that on Tuesday night the opposition ran through the streets to Barrow’s rally in Bakau near the capital, crowding on to the back of pickup trucks, singing “Jammeh must go, he’s a killer; he’s a nonsense guy,” blowing whistles and clanging pots and pans. Tourists looked on in amazement.
However, theGuardian reported that teenage girls from Banjul High, campaigning in green T-shirts emblazoned with the president’s face, shouted: “He gives us free education. Everything is free in the Gambia. ” and that in 2011, Jammeh won by 71 per cent of total votes cast.
US President Barack Obama wondered why African leaders want to stay longer in power in his tour in Africa. He addressed African heads of state in Ethiopia and challenged them to hand over to other leaders.