by admin
in Uncategorized
0

Joseph Mucheru, Cabinet Secretary, Ministry of Information Communication and Technology is welcomed by  the Media Council of Kenya chairman Charles Kerich at a Nairobi hotel during the inauguration of the new MCK board.
By PATRICK MAYOYO
newsdesk@reporter.co.ke
The Media Council of Kenya has asked media houses with journalists who use their positions in newsrooms and their social media platforms to propagate interests of political parties to ‘let them go’.
And, Mr Joseph Mucheru, Cabinet Secretary, Ministry of Information Communication and Technology asked the MCK to ensure there is order in the media sector.
Without mincing words, the new  MCK chairman Charles Kerich, said media houses should let go of all ‘politicians’ in the newsrooms or any journalists  who have declared affiliation with political parties.
In the recent past, journalists from different media houses in the country have found themselves on the receiving end for either expressing their political affiliations through their social media platforms or declaring interest to vie in the 2017 General Election.
While it is debatable if a journalist could be breaching the MCK code of conduct by declaring interest in a political office while still in a newsroom, journalists who are still in newsrooms but have openly declared their preferred political parties or presidential candidates are in breach of the same code.
Mr Mucheru, who was speaking during the inauguration of the new MCK board led by Mr Kerich, said that the mandate of MCK is grounded in the principles of open and independent media that promotes participatory democracy, rule of law and accountability in the governance process.
“You have a watchdog role to safeguard the rights and privileges of both the practitioners and the citizen and this puts you in the unenviable position of playing arbiter in often times delicate situations that demand wisdom and tact in order to satisfy competing interests,” the CS noted.
Mr Kerich who is also the Editor-in-Chief at the Star Newspapers observed that a number of journalists are using social media to express their political affiliations a development that comprises their fairness in coverage of political issues.
“Media houses must let go of politicians in newsrooms, media practitioners that have declared affiliation to political parties, movements, groupings or indicated their intentions to vie for elective positions in 2017,” the MCK chair said.
Differences have emerged in newsrooms between Cord and Jubilee affiliated journalists a development that has strained working relations in a cross section of media houses.
The problem is not just linked to reporters but even senior editors in different media houses who are being accused of serving the interests of either the Cord or Jubilee coalitions.
It is even feared that the embedded journalists are spying on their colleagues on behalf of the two major political coalition’s thereby compromising journalism ethics.
Mr Kerich asked media houses that have not developed social media policies and in-house code of conduct for their journalists to do so in order to ensure journalists have clear guidelines on how they are going to conduct themselves. 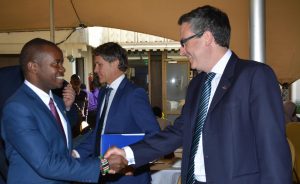 Ministry of Information Communication and Technology, Cabinet Secretary, Mr Joseph Mucheru, greets a participant during a ceremony to unveil the new MCK board at a Nairobi hotel. Photo courtesy of MCK.
So far, Nation Media Group is among few media houses that have an editorial policy, a code of conduct for its journalists and a social media policy.
Mr Mucheru said MCK has to ensure that the rights and privileges of journalists are protected, professionalism and accountability of media workers is upheld and the citizen’s reputation and right to fair media is not injured.
“You also must ensure that a conducive atmosphere and opportunity exists for the public to not only raise their grievances against the conduct and behavior of journalists and media houses but also to trust that the Media Council can be a neutral arbiter during situations that require dispute resolution,” he emphasized.
Mr Mucheru said although media freedom is a prerequisite for a thriving democracy his ministry was concerned that there have been a worrying increase of incidences of attacks on journalists in Kenya while on duty.
“This sad state of affairs cannot be tolerated in a country that boasts of legally protected freedom of expression because it instills fear and anxiety among media practitioners,” he said.
The CS added that the Government will do everything in its power to ensure perpetrators of crimes against journalists are brought to book and that press freedom is guaranteed in line with the Constitution. 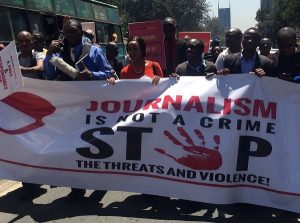 Kenyan journalists protest over increasing cases of harassment. Photo courtesy of KBC.
Mr Mucheru said as the General Election draw near, journalists should avoid coverage that can provoke ethnic hatred and division by observing the cardinal professional tenets of objectivity, fairness and balance.
Mr Kerich said although journalists like all other citizens have a right to utilize social media platforms, they have to draw a line between personal opinion and views that suggest that they are professionally biased.
What MCK chairman did not say is that zeal with which some journalists allied to the two coalitions are behaving on the social media platforms have reduced them to playing the role of party youth wingers.
As the county heads towards the 2017 General Election, the worst thing that can happen is to have the media sector polarized along political interests.