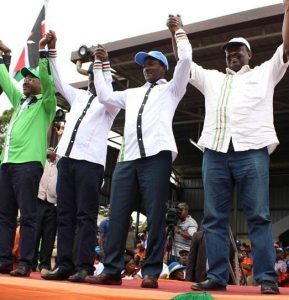 NASA leaders Moses Wetangula, Raila Odinga, Kalonzo Musyoka and Musalia Mudavadi. PHOTO | COURTESY
BYSIMON ALLISON
If the last couple of years have taught us anything about democracy in Africa, it is that coalitions are the key to electoral success for opposition parties.
Look at Nigeria, where opposition parties united to form the All Progressive’s Congress, throwing their combined political muscle behind a single leader.
Sure enough, their chosen leader, Muhammadu Buhari, is now the President of Nigeria, handily defeating incumbent Goodluck Jonathan in 2015.
More recently, look at the Gambia, where opposition parties and their principals put their individual aspirations aside, recognising that President Yahya Jammeh’s electoral dominance would only be reinforced by a crowded field of candidates.
Instead, they all campaigned in support of Adama Barrow. Barrow’s comprehensive victory in the December poll eventually forced Jammeh out of office – with a little encouragement from the region – ushering in what Barrow promises to be a new era of democracy and prosperity for the Gambia.
It’s no wonder, then, that elsewhere on the continent, opposition parties are looking at these examples and seeking to repeat them – although they are finding it a tricky proposition.
In the Democratic Republic of Congo, for example, several formative but competing opposition coalitions have been created.
In Zimbabwe, talks to form a grand alliance against Robert Mugabe’s Zanu-PF ahead of the 2018 vote appear to be stumbling on mutual distrust between the Movement for Democratic Change-Tsvangirai and Zimbabwe People First, the two largest opposition parties.
Coalitions are the key to electoral success for opposition parties 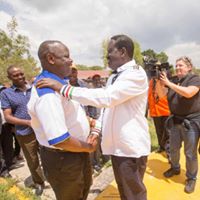 CORD leader Raila Odinga with Bomet Governor Isaac Ruto. PHOTO | COURTESY
In Kenya, opposition politicians are well aware of the imperative to unite. If early polls are right, they are facing an uphill struggle to unseat President Uhuru Kenyatta, who has consolidated his support for a second term under the banner of the newly formed Jubilee Party.
If Kenya’s opposition parties split the opposition vote between them, they risk handing Kenyatta an easy election victory come August this year, when Kenya’s general elections are scheduled.
Of course, the opposition in Kenya have tried to unite before. In 2002, in a shock result, the National Rainbow Coalition defeated the Kenya African National Union (KANU), which had ruled Kenya since independence in 1963 – a powerful reminder that unity can beat incumbency.
And in 2013, the Coalition for Reforms and Democracy (CORD) united most of the major opposition parties in a bid to prevent Kenyatta’s election.
It didn’t work. Kenyatta, then deputy prime minister, created his own coalition of political parties to boost his chance of victory, and ultimately his Jubilee Alliance proved stronger than CORD at the polls.
With general elections scheduled in Kenya for 8 August, opposition parties know that they need to try to unify again. Enter the National Super Alliance, with the space-age acronym, NASA.
Launched on 11 January, NASA promises to be bigger and better than its predecessors. ‘Pray for us to solidify, to be one, to be united, and we shall win,’ said Musalia Mudavadi, leader of alliance member Amani National Congress Party.
In Kenya, opposition politicians are well aware of the imperative to unite 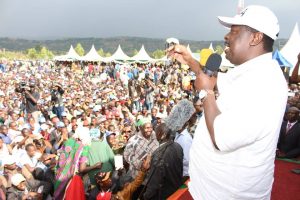 ANC leader Musalia Mudavadi and the brainchild behind NASA.PHOTO | COURTESY
According to, Kibisu Kabatesi, a spokesperson for Mudavadi, NASA will incorporate not just political parties but also trade unions and civil society organisations in an ambitious bid to create a nationwide movement.
‘The difference is that NASA harnesses the discontent of Kenyans against Jubilee’s exclusionist ethnic duopoly, corruption, arrogance and the high cost of living that feeds the insatiable need to tax Kenyans more and more for less value,’ said Kabetesi.
So far, so good. Even though it is gaining increasing momentum, NASA has a long way to go before it is in the right shape to pose a credible challenge to Kenyatta, who is running for re-election.
For one thing, it still lacks the basic infrastructure necessary to conduct an effective campaign. It doesn’t have a website, or a social media presence, or even a logo.
Much more serious, however, is that NASA does not yet have a leader. The opposition may have decided to unite, but they haven’t decided whom exactly they will unite behind.
The leading candidate is Raila Odinga from the Orange Democratic Movement, who remains one of the most popular politicians in the country.
Odinga has run for president before, however, and lost every attempt. This would be his fifth tilt at Kenya’s top job, and other politicians think that it is their turn to lead the fight against the ruling party.
Other potential candidates include Mudavadi, Wiper Party’s Kalonzo Musyoka, and Ford Kenya’s Moses Wetangula.
Kenya’s National Super Alliance promises to be bigger and better than its predecessors 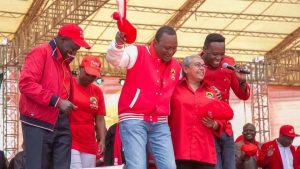 President Uhuru Kenyatta and his deputy William Ruto are set to face the yet to be named NASA presidential candidate and his running mate. FILE PHOTO
This could prove costly. To all intents and purposes, campaigning for next year’s election began last year, when Kenyatta launched his new Jubilee Party at a lavish ceremony.
Since then, Jubilee have been able to refine their messaging, get their organisational structures in place, and prepare a nation-wide strategy that is targeting a handsome victory. (Jubilee is aiming, according to somereports, to win 60%-70% of the votes.)
NASA, on the other hand, has yet to agree on a presidential candidate – never mind present a comprehensive framework to voters. And it is clear that they are struggling to agree on a strategy to tackle Jubilee.
After months of complaining about the government’s imposition of a controversial new electoral law, opposition leaders at the launch of NASA abruptly dropped their plan for mass protests on the issue in favour of a mass voter registration drive instead.
In elections the world over, the odds are usually stacked against opposition parties. One way to improve those odds is for opposition parties to present a united front.
But for this approach to work in Kenya as it did in 2002, the parties involved – and their ambitious leaders – have to realise that simply forming a coalition is not enough.
Without a credible leader, a clear strategy, and an inspirational message – and with only just seven months to go until voting day – NASA risks handing the election victory to the Jubilee Party on a platter.
SOURCE: INSTITUTE FOR SECURITY STUDIES (ISS)