Limbe Municipal Stadium. PHOTO/COURTESY
By ARISON TAMFU
newsdesk@reporter.co.ke
The day was Saturday November 29, 2016. The event was semi-final of Africa Women Cup of Nations (AWCON) pitting Nigeria against South Africa – a rare football duel that spontaneously summoned a multitude of football lovers to the Limbe Municipal Stadium in Cameroon to witness the football jamboree.
Nelson Agbor, a shrewd bulky man who looks 35, was among those in attendance but he did not go there to watch the match. As the crowd thronged the entrance to the stadium, each battling to secure a seat inside the stadium, Agbor was busy setting up a makeshift shop meters away from the stadium –but close enough to entice customers.
The shop contained almost all basic commodities from football items, electronics, fake flowers, curtains to chewables. And then he positioned a large TV screen in front of the shop to permithis customers who could not afford match entry ticket to follow the encounter on the screen. Agbor has been enjoying a steady rise in salessince the football tournament started, but on this particular day,demand for his goods was exceptionally gratifying.

“Buyers and people just eye-shopping surrounded my shop in their numbers. I had to employ another young man instantly to assist me in selling because the demand was enormous” said Agbor. “They bought jerseys, vuvuzelas, flags, chewing gum and so on. It was a good-day-for-business” he added.

The demand was so high that he ordered for more goods instantaneously- much was sold before and after the encounter he explained. At the end of the gameSouth Africa lost to Nigeria by a painful one goal to zero, a sad outcome for Agbor who supported South Africa staunchly but for his business, it wasa superb day.

Road infrastructure in Limbe has received a facelift thanks to the advent of the Limbe Municipal Stadium. PHOTO/ARISON TAMFU
“You know what?” Agbor asked rhetorically, putting on aserious-look as if to make a startling revelation. “I made 200% profit that day. It changed my life,” he declared.
And indeed it changed his life. The profit made it possible for him to expand his business and today, nine months after AWCON, he is a proud owner of a small enterpriseemploying eight people in Limbe. To Agbor, he owes his success to the Chinese for constructing a stadium in Limbe.

“Without the Limbe stadium, I would have still been unemployed today. The stadium is a blessing to me. Interestingly most of my goods are from China” he said.

In 2014, China Machinery Engineering Corporation handed over the 20,000-capacity Limbe Municipal stadium to the Cameroonian government after “a clean and good job” according to Dr. Emmanuel Wonyu, Secretary General of the Ministry of Sports and Physical Education who presided over the handing over ceremony.
At the same time in West region of the country, the Chinese firm completed the construction of the Bafoussam Omnisport Stadium containing 20,000 seats on the different spectator stands.
“It meets the requirements of FIFA. These are good football stadiums” said Jim Wang, the Chinese engineer who managed the project.
When Wang constructed the stadium, little did he know that it was going to serve more than just sports-it turned out to be a life-changer for communities and individuals like Njegeu Jean Claude in Bafoussam. Njegeu graduated from the University of Dschang in 2012 and like most Cameroonian graduates he roamed the streets of Cameroonian cities searching for a job. 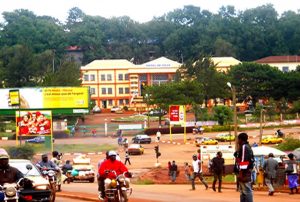 The town of Bafoussam. PHOTO/COURTESY
His search was in vain.But the advent of Bafoussam Omnisport Stadium in 2016 changed his life. Just like Agbor in Limbe, he opened a small shop not far away from the stadium. On match days, he will go closer to the football fans advertising his shop and at the same time selling his goods.

“It was like a miracle. I sold so many of my items. I made so much profit and decided to open a bigger shop. And the business is growing” Njegeu said standing akimbo in front of his shop in Bafoussam replete with sport items.

He said shop keeping has now become his permanent job as without the stadium, he would still be looking for a job today.
“Each time a Chinese comes to my shop to buy something, I call him “brother” and sell to him at a discount because these people changed my life. China is my second country now” he said laughing hysterically.
Njegeu and Agbor are telling examples of how Chinese stadia have significantly boosted local small and medium enterprises (SMEs) in Cameroon. Statistics are unavailable but it is believed that over 5000 indirect jobs have been created since 2016 in Limbe and Bafoussam as a result of the Chinese stadia.
Panacea for community Development

Small Business Enterprises (SMEs) have increased in Bafoussam following the construction of Bafoussam Municipal stadium. PHOTO/ARISON TAMFU
Importantly, the stadia have similarly transformed communities. In Limbe, the stadium is located in Ngeme, a village that was unknown one year ago. But now it represents one of the emerging towns in Cameroon thanks to the stadium: infrastructure, road network, business activities have considerably altered Ngeme into a veritable urban settlement.
In Bafoussam, the stadium is located in Kouekong neigbourhood, a hitherto rural bushy area located some 16 km away from the city centre but nowan eye-catching football arena leaving no visitor indifferent.

“Kouekong has been developing very fast since the Chinese constructed the stadium. More people are buying land to construct and establish businesses here” said 74-year-old Wakam Blaise who has spent all his life in the locality.

Blaise said when he was still a child; he never imagined that local roads will be tarred in his lifetime.
“See for yourself, every place is beautiful” he said pointing at the road and newly constructed buildings Kouekong.
Football Is Back
In Cameroon football is more than a national game – it is a phenomenon, a religion and a pillar on which the nation survives. Prior to the construction of the stadia, that phenomenon was losing steam after the national football team suffered repeated defeats in international competitions and the stadia were becoming empty every day -a sad situation coming after its glorious days in 2002 and 2004 when the country won the nation’s cup two consecutive times.
But football came back to life after the stadia were constructed. Cameroonians started going to stadium to watch football competition again.
“It was like what was holding the progress or success of football in Cameroon was lack of stadiums. Interestingly, the stadiums ushered in a renaissance of Cameroon football and the teams grew from victory to victory” said Raymond Ndifor, a football analyst.
The victory began with the AWCON competition that inaugurated the stadia. Cameroon performed so well that it competed the finals with Nigeria and emerged as the vice champions. Shortly after that the male team won theAfrica Cup of Nations in Gabon.
Cameroon will host the Africa Cup of Nations in 2019 and some of the crucial matches are expected to be played on the stadia.

“Football is back in Cameroon. We are waiting to show Africa what we are made of come 2019. We will be in these very stadiums to watch and celebrate football made in Cameroon” said Ndifor smiling.

Agbor is looking forward to more Chinese stadiums in Cameroon.
“I hear they (China) are constructing other stadiums in other cities, this is very good for the development of the country. We hope they will construct more in the years to come. I can assure you that the lives of many people will be changed when we host Africa cup of Nations in 2019” he said.
This project was produced as a result of a grant provided by the Africa-China Reporting Project managed by the Journalism Department of the University of the Witwatersrand.

Expert: Paris Agreement only chance for survival of coral reefs

Your paper coffee cup is an eco-nightmare

New report: Solar is now the fastest growing energy source in the world