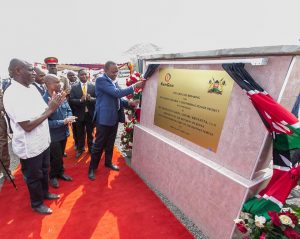 President Uhuru Kenyatta officially launches the 158 MW Olkaria V power project. PHOTO/PSCU
PSCU — President Uhuru Kenyatta broke ground for the construction of the Olkaria V power project which will produce 158 MW of electricity.
The President at the same time commissioned 14 wellhead units producing a total of 75 MW of electricity.
The ‘wellhead unit’ is a unique technology developed by Kenyan engineers to harness geothermal power, which has reduced the duration between the first drilling of a well and installation of a geothermal plant from five years to two years.
The President challenged other Kenyan institutions to adopt the innovative approach of Kengen to transform the country.
“Innovation must be the new identity of Kenyan institutions if we are going to see the transformation Kenyans demand,” said the President when he spoke at the function at Olkaria, Nakuru County
President Kenyatta said the Jubilee Government has a clear vision to provide sufficient, cheap, green and reliable energy for Kenya.
“Once again, the path is clear: we expect that the peak load will grow to about 15,000 MW by 2030; that demand will be met by raising installed capacity gradually to 19,200 MW by 2030,” said the President 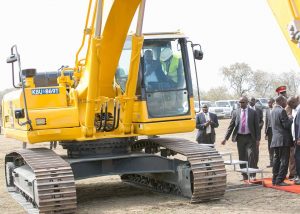 President Uhuru Kenyatta ‘breaks ground’ for the 158 MW Olkaria V power project. PHOTO/PSCU
He said the expansion of geothermal power production will contribute to Kenya’s prosperity.
“In commissioning these wells, and in breaking ground for the new project, we take a mighty step on the road to prosperity for this nation,” said the President.
He said Kenya has one of the largest reserves of geothermal energy and more plants will be constructed to harness the power for the benefit of Kenyans.
“That this form of energy is not subject to the vagaries of the weather, and that it runs at a respectable rate more than 90% of the time every year, means that we can bring reliable power to every Kenyan home,” said the President.
Energy Cabinet Secretary Charles Keter said Kenya has come along way and is a trendsetter in the energy sector.
He said President Kenyatta has shown total commitment to maintain and increase Kenya’s global leadership in green energy production and consumption.
Nakuru Governor Kinuthia Mbugua and Japan’s Ambassador to Kenya also spoke at the function.