“Whether by design or through unavoidable circumstances, by missing out on the January 30th swearing-in, Wiper leader Kalonzo may just have evaded a deadly Jubilee trap!,” he claims.

The journalist said Jubilee honchos had planned to press treason charges against the Wiper leader as soon as he took the Oath.
“Given that the Judiciary has been captured by the State (you can see how hitherto water tight cases against computer-generated leaders are being thrown out by Judges), the plan would have been to do everything to ensure that SKM would never ever vie for any elective office again!,” he says.
However Wiper supporters have dismissed the claims as an attempt to sanitize Mr Musyoka after he failed to turn-up at Mr Odinga’s swearing-in at Uhuru Park together with ANC leader Musalia Mudavadi and Ford Kenya’s Moses Wetangula.

Mr Kilonzo adds that the Ethics and Anti-Corruption Commission, the Directorate of Criminal Investigations Department (DCI) and the Judiciary, would have been roped in to sink Mr Musyoka politically.
However Wiper supporters have dismissed the claims as an attempt to sanitize Mr Musyoka after he failed to turn-up at Mr Odinga’s swearing-in at Uhuru Park together with ANC leader Musalia Mudavadi and Ford Kenya’s Moses Wetangula. 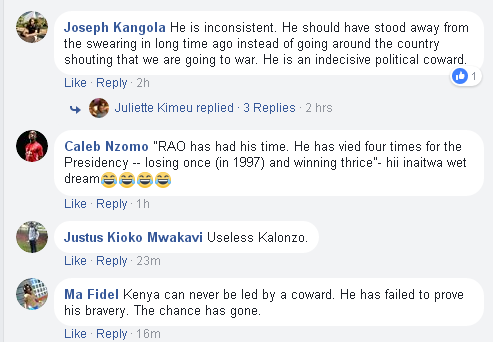 He asserts that the plan would have been applauded by Mr Kalonzo’s political foes both in Jubilee and in NASA.

“For them, it would have meant one formidable opponent less and out of the way in the next Elections!,” he opines.

Mr Kilonzo avers that unlike Mr Musyoka, Mr Odinga has had his time as he has vied four times for the Presidency — losing once (in 1997) and winning thrice. But every time he has won, he has been denied the reins of power!
“To the “master planners”, RAO has had his time. And now, his heir apparent Kalonzo had to be destroyed, too! This would completely obliterate the seemingly indomitable NASA machine and give Jubilee (KANU) a chance to rule Kenya for the next 100 years!,” he notes.

Mr Kilonzo adds that by accepting to be sworn-in as the Nasa Deputy President, the ‘oath’ would have been Mr Musyoka’s poison in a golden chalice!
“Yet, most NASA supporters are totally unaware of the snare!,” he concludes.

Experts: Decline in elephant poaching in Africa could be short-lived