Taita Taveta University Chancellor Sally Kosgei applauds during the granting of a charter to the institute on December 14, 2016. She is said to have used offshore companies to shelter her wealth from scrutiny. PHOTO |NATION MEDIA GROUP
Some of Appleby’s clients

By PATRICK MAYOYO
newsdesk@reporter.co.ke
New revelations from the International Consortium of Investigative Journalists (ICIJ) have shone a fresh light on a secret world of tax havens and offshore financial deals.
The Paradise Papers is a global investigation into the offshore activities of some of the world’s most powerful people and companies.
These structures allow lawyers, bankers and other professionals to protect their wealthy and powerful clients’ cash from tax officials or hide their dealings behind a veil of secrecy.
At the centre of the revelations is Appleby, one of the world’s biggest offshore law firms, with huge clients including commodities giant Glencore, oil major Shell, Goldman Sachs and HSBC.
This isn’t just a story about tax. As we have previously exposed, the secrecy sold in the offshore world enables terrorism, money laundering and sanctions-busting. It allows dirty money into our property market and banks, and lets scammers rip off honest investors and businesspeople.
In Kenya, Taita Taveta University Chancellor Sally Kosgei and former Agriculture minister Sally Kosgei has been named in the Paradise Papers.
Before she joined politics, Dr Kosgei was former President Daniel arap Moi’s Permanent Secretary in the Office of the President, Head of Civil Service and Secretary to the Cabinet.
The papers show that Dr Kosgei owned a Mauritius company, Zonrisa Limited, which was previously registered in the Isle of Man under the name Aisha Limited.
She also owns the Murang’a-based Zena Roses Limited in Gatanga where she grows rose flowers for export and two other flower farms: Zena Asai Farm and Zena Sosiani near Eldoret town managed by her son Ahmed Nzibo.
Dr Kosgei is currently the Chancellor of Taita Taveta University.
Documents sent to Appleby law firm indicate that proceeds from this 70-hectare firm were used by Aisha Limited to purchase an apartment in central London near Harrods.
The cost of that apartment is put at $1 million (Sh100 million).
“Kosgei owned her offshore company on April 2001, when she began work as the Cabinet secretary in the Office of the President (and) the ownership continued throughout her tenure as one of Kenya’s most powerful politicians,” International Consortium of Investigative Journalists (ICIJ), a US-based organisation that coordinated the research, said. 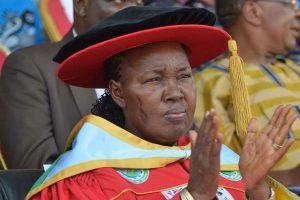 Taita Taveta University Chancellor Sally Kosgei applauds during the granting of a charter to the institute on December 14, 2016. She is said to have used offshore companies to shelter her wealth from scrutiny. PHOTO |NATION MEDIA GROUP
Dr Kosgei told ICIJ that she bought the flat with personal funds before becoming the head of Kenya’s public service at a time when she expected to spend time in the United Kingdom due to her children’s studies.
She is quoted saying that “there is no relation whatsoever” between the purchase and date of her work in the Office of the President.
She also told ICIJ that she acted on a lawyer’s advice and that it was not illegal for Kenyans to buy property through offshore companies and that she had “satisfied all obligations — legal, professional and ethical — as a public official in Kenya” and declared everything that is and was required.
The International Consortium of Investigative Journalists and 95 media partners explored 13.4 million leaked files from a combination of offshore service providers and the company registries of some of the world’s most secretive countries.
The files were obtained by the German newspaper Süddeutsche Zeitung.
The Paradise Papers documents include nearly 7 million loan agreements, financial statements, emails, trust deeds and other paperwork from nearly 50 years at Appleby, a leading offshore law firm with offices in Bermuda and beyond.
The documents also include files from a smaller, family-owned trust company, Asiaciti, and from company registries in 19 secrecy jurisdictions.
The Paradise Papers reveal offshore interests and activities of more than 120 politicians and world leaders, including Queen Elizabeth II whose private estate indirectly invested in a rent-to-own loan company accused of predatory tactics.
At least 13 allies, major donors and Cabinet members of U.S. President Donald J. Trump appear, including Commerce Secretary Wilbur Ross’s interests in a shipping company that makes millions from an energy firm whose owners include Russian President Vladimir Putin’s son-in-law and a sanctioned Russian tycoon.
The leaked files from Appleby, the offshore law firm, include details of tax planning by nearly 100 multinational corporations, including Apple, Nike and Uber.

Turkana: Vast oil deposits in Kenya’s poorest county could prove a blessing or a curse

Report: How to cut the cost of wind energy in half